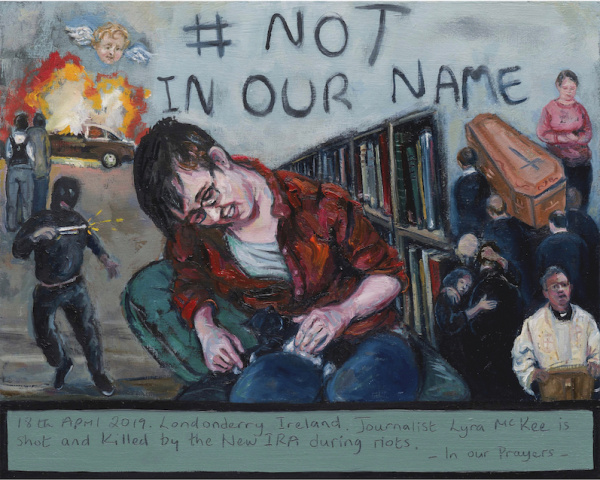 Next week an exhibition celebrating the life of Muriel Gardener opens in London at the Freud Museum. It seems she came from an affluent American family and was a woman of enormous courage and compassion, taking great risks to save lives while in Austria in the 1920’s. There, she fought fascism aiding the Resistance movement living a double life, smuggling fake passports into Austria to help resistance fighters flee the country. Her quest for fairness and equality continued until her death.

Then on the news this week we learnt more about the young Journalist Lyra Mckee , two men are charged with her murder.

These two women are a reminder for me, of all of those people with courage, working underground or as journalists, film makers or reporters , that risk their lives to help others and to inform us. With an integrity that comes from being there, seeing with their own eyes, they shine a light into the darkest corners, giving so much of themselves to make the world a better and fairer place for everyone.

In 2019, I made this small Ex Votive painting (part of 100 Painted Vows). Lyra and so many others, represent the best of the human race in the worst of times.

Information on the life of Muriel Gardener –

Code Name Mary: The life of Muriel Gardiner runs at the Freud Museum London from 18 September to next year ,23 January