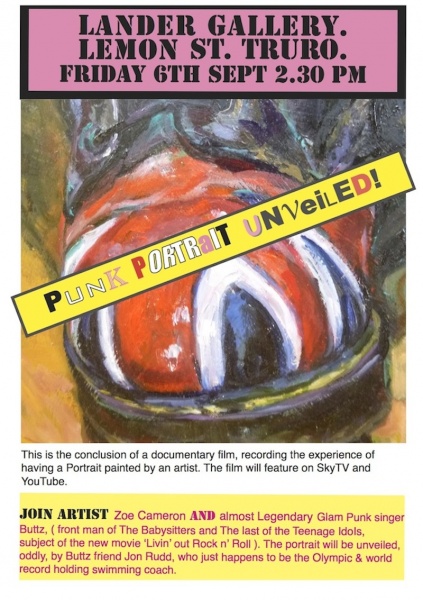 Zoe Cameron’s latest work will be publicly unveiled for the conclusion of a documentary film.

Punk Singer & Filmmaker, has been making a video  documentary on the subject of sitting for a professional portrait.   The pair will be joined by SKY TV for a short piece regarding this film,.. and discussing the documentary “Livin’ Out Rock ‘N Roll” (produced by Paolo Sedazzari) about Buttz’s career in the London punk scene through the 80’s. The film has just had it’s premiere in London’s Soho, and been selected to show at the CBGB’s film & music festival New York, this October. It also has a screening on the 30th August at the Portobello Film Festival London.

The portrait will be unveiled  by Olympic and World record holding swimming coach Jon Rudd of the Leander Swimming Academy Plymouth who happens to be a fan of Buttz’s bands “The Babysitters” And “Last of the Teenage Idols”.

Buttz Links – YouTube ‘Livin’ Out Rock’n’Roll’ film trailer : www.youtube.com/watch?v=psZsZ-sM1WA
Review written about the ‘Livin’ Out Rock’n’Roll’ rockumentary : www.chellesrockblog.com/1/post/2013/08/livin-out-rock-n-roll-the-movie-review-by-kate-thompson.html
Jon Rudd’s website (he is the coach for Ruta Meilutyte who won Gold at the Olympics and is the  World Record Holder)  :www.jonrudd.org 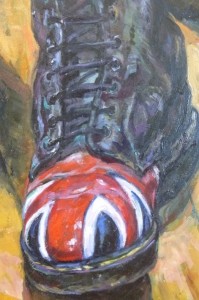 Detail. Portrait of a Punk.