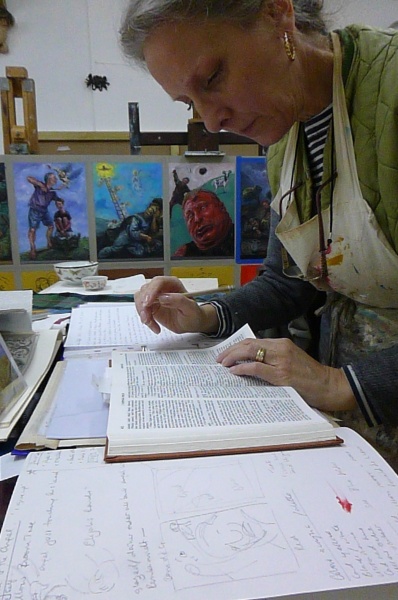 On Thursday 29th September 2016, at All Saints Church, Marazion, the large oil painting which took two years to complete, was installed and went on public view.

At the beginning of this project, when first I visited All Saints Church to gather ideas , there were three things that seemed significant to me . The first was all of the love the local people had stitched into the colourful kneelers. The second was that the people I encountered in the church, were mostly visitors, who seemed to be looking for something transitory. The third, was the story Canon Nigel had told me, of Archangel Michael appearing to the fishermen. Working with these ideas, I went back to the studio and began this painting about Pilgrims & Shrines.

As a painter I chose to work in complete isolation in my studio. During that time, I am at one with the painting, it feels like a part of me. To the point where , when the work is complete, at an unveiling or private view,  it feels uncomfortable because I have become disconnected from the conduit of all my deepest thoughts and feelings. I imagine this will be familiar to other creative people , who endeavour to deliver their vision and ideas to the world. 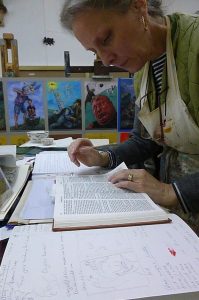 Researching in the studio. 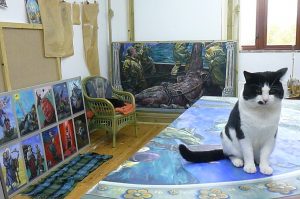 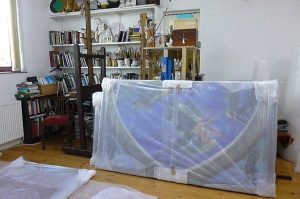 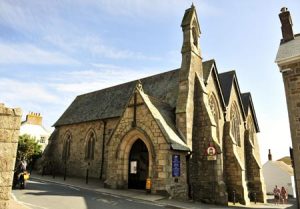 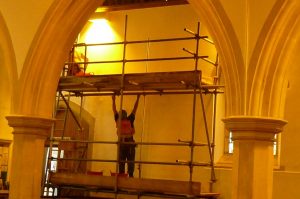 Scaffolding going up for installation. 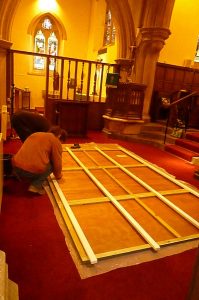 The painting is prepared .

When the painting was unveiled those present received it and embraced its stories with open minds. During a discussion which followed, I was relieved to find my representation of the symbolism and narrative at its core was understood. As were the events depicted from both the old and new testaments. Interesting for me was the collective agreement that the purpose of life journeys and pilgrimages being made then, are not altered for us today. 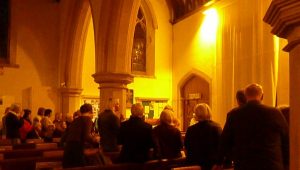 Gathered for the unveiling. 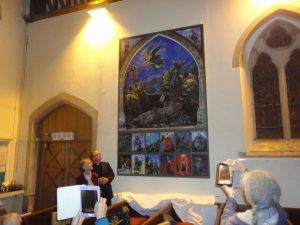 The painting is unveiled. Below Revd Canon Nigel Marns and Zoe Cameron. Thanks to Tanya von Zychlinsky for permission to use her photograph.

When I began this work, I had no idea of the of the part my painting would play in the bigger plan taking shape within Cornwall diocese to regenerate the pilgrims paths . I am most grateful to Revd Canon Nigel Marns & Revd Annie HenryHolland who commissioned the work, without any specifications at all, and who trusted that I would make a painting that was ‘in step and in harmony ’ with this ancient and Sacred Shrine on St Michaels way.

My thanks to Tanya von Zychlinsky who recorded a part of the evening’s discussion and uploaded it onto YouTube .