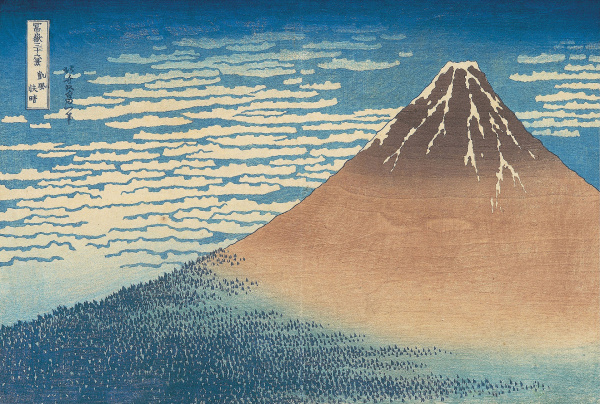 Hokusai returned again and again to Mount Fuji as subject matter. He considered the mountain to be the source of secret of immortality because of the goddess in the tale of the Bamboo cutter, who deposited the elixir of life at its peak.

Katsushika Hokusai, (1760–1849), is a wonderful artist, printer and engraver. I was introduced to his work at college where I realised I was already familiar with his famous image of the wave, because it is so universally popular. Wood block printing is a real craft, a traditional form of art in Japan known as ‘Ukiyo-e’ which refers to pictures printed in many colours using woodblocks, and popular in Japan around the 18th century .

He played a significant roll in influencing Western artists in the late 19th and early 20th centuries , an influence that is evident in many of the works by Monet, Manet, Renoir and Van Gogh. I was surprised as a student to learn that this influence on the impressionists and post impressionists began, in a way, because of the ceramics that were being exported to the west, they were being wrapped in Ukiyo-e prints, because they were were not valued, and were used as wrapping paper to protect the pots on their journey. Of course when the western artists saw how different they were, their influence began to spread .

These images come from the series of 36 and more wood block prints that Hokusai made of Mount Fuji, and I this thought it might be a good way to celebrate the Tokyo Olympics 2021.

A special good wish to John Rudd and all , he is leading Ireland’s Swimming and Diving team in this years Olympics.