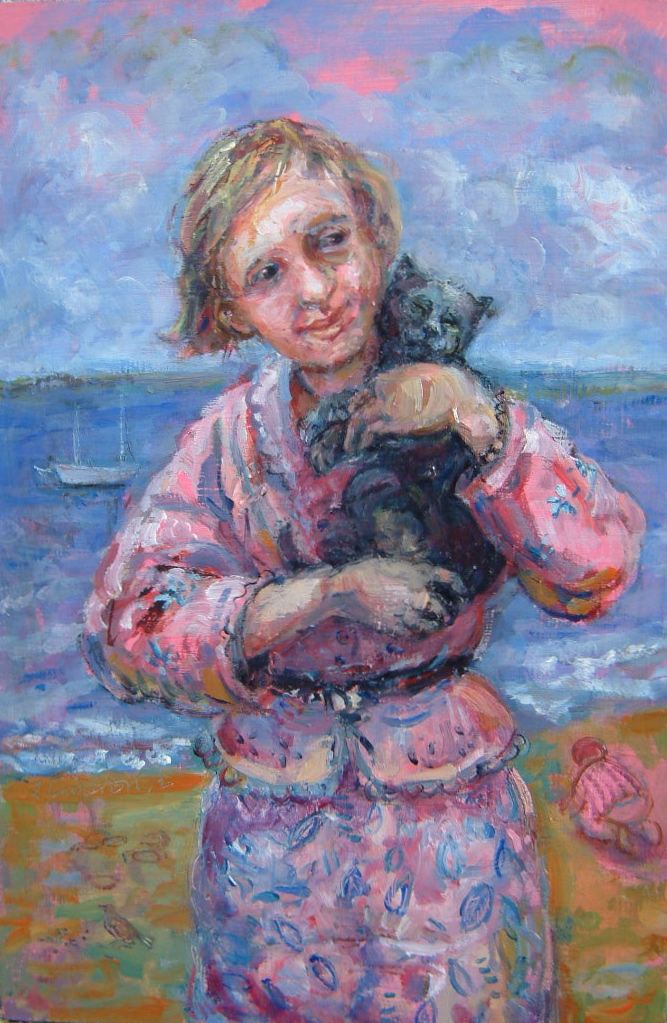 As a child I learned a great deal from loving and looking after animals that were reliant upon me. To see children with a passion who really want to get it right and who love their pets is heart warming.

However, many of us have experience of some child animal relationships, where little help and guidance is given by an adult or consideration given to the pet which can be very uncomfortable to witness . We have two rescue cats who still need to heal after their traumas. Then sadly there is the child who sees this as a green light to explore just how far they can take their newfound power and neglect of the poor creature dependent on them.

These ideas and thoughts, at both ends of the spectrum, run through my work. The loving and proud keeper of show chickens, to the innocuous looking child with murderous curiosity and intent.

With this in mind, I have put together a few examples of my paintings which consider these issues, and the transient nature of relationships, trust and power .

In 2012, I read a story in the newspaper about some children who tried to help animals in a zoo, after it had been bombed by the Israeli army. There were pictures of small boys with some of the animals, a sad and curious sight. It prompted me into making this painting. I felt great compassion for both the children and the animals, as they clung together trying to survive the terrible situation they found themselves in.

I have always enjoyed the company of cats, I have found them to be good companions and friends. I admire their individuality, independence and fortitude . Over the years they have been my frequent and willing models, especially after a good feed or play.

For 20 years I had a little dog called Ruby that went everywhere with me . She features in many of my paintings of that time, especially those painted at the old Net Loft Porthleven, as she was my constant companion.

The flip side of love is abuse, often described by perpetrator’s as the same thing. A bully sees the opportunity in their victim, as clearly as seeing a big flashing green light. There is a willingness of many animals, pets, and empathetic individuals to go along with things that are really unreasonable or cruel. I wanted to consider this in the painting, a child abusing the love and loyalty of a dependent, simply because they can, or because it gives them pleasure .

I used what I considered to be a nostalgic colour palette, similar to illustrations in children’s old story books,  and made the central figure an inoffensive looking child to create ambiguity when reading the elements put together in this composition. It asks, what do we witness , and what are we choosing not to see? Are we reluctant and slow to believe the child could actually go ahead and do such a thing as to put her dog down a well, because that is uncomfortable for us ? Above the angels cry out for her to stop.

The Goldfish and falling cat are both early works. They explore the notion of animal dependency and cruelty. Are the subjects in these two paintings safe or being abused?

Like many , I have more affinity with the love and respect expressed for animals in these final two paintings.

Reading the local newspaper,  I used to enjoy looking at the photographs of annual Agricultural shows.  I noticed that for consecutive years, the same young boy, who was gradually growing up, had won prizes for his pet chickens/poultry. His interest in breeding and showing, sparked the painting above . Which was a part of the ‘Living on the line’, eclipse exhibition of paintings and sculpture at The Count House, Botallack, St Just in Penwith, in 1999 .

I used the same subject some years later on this painted egg storage box, which has been decorated with the boy on the top of the box, and with chickens each side.